My Favorite Movies- Week One 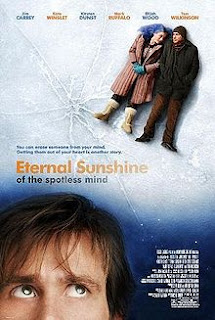 Eternal Sunshine of the Spotless Mind

“How happy is the blameless vestal's lot!

Eternal sunshine of the spotless mind!

Eternal Sunshine of the Spotless Mind is a movie that stays with you long after you’ve seen it. It’s a movie about memories and love and how we try to escape the truth of it all. Humans are fragile little bodies of light and dark, constantly trying to forget memories that have caused us pain. Charlie Kaufman and Michel Gondry explores this concept very successfully in this film.

Kate Winslet plays Clementine Kruczynski, a tangerine of a woman who changes her mind as often as she changes her hair color. Joel Barish, played by Jim Carrey, is a man emotionally stunted, who has an easier time expressing his emotions through his journal and his drawings. When Clementine blows like a wild wind through Joel’s life, their relationship of ups and downs eventually ends in a trip to Lacuna, a company that specializes in erasing memories.

This film brings up a very good point; can we truly erase memories and should we? This movie works on many levels. It is an experiment in memory, love, and non-linear storytelling. The dialogue is realistic, witty, and at times so deep that you find yourself swimming in the same dream-like setting that the characters do. Winslet is wonderful in a role that reinforces the perception that she is one of the greatest young actresses of our time. Through the course of the film she wears many faces: loving, wild, brazen, crude, fragile, and eventually, a woman looking for her own mind.

“But I'm just a fucked-up girl who's lookin' for my own peace of mind; don't assign me yours,” Clementine says in a scene where the two lovers discuss whether they can ever work as a couple.

Carey steps out of his typical role of jokester and proves that he has hidden talents. He brings tenderness to his portrayal as the emotionally withdrawn Joel. Joel is a nice guy also looking for a piece of his mind. In essence, all of the characters in this film are damaged goods. They are trying to find sanity in a setting that is forever shifting and disappearing like a surreal dream morphing across the human mind.

Jon Brion’s music melts across the dream landscape setting the mood and tone for every scene. Like a wind chime twinkling in the wind, his music moves in and out helping to bring the audience deeper into Joel’s shifting dream world. The music which is mostly instrumental works perfectly in enhancing the already surreal world that it exists in.

Throughout the film, the director and writers are playing with the idea of memories and time. The film jumps in and out of chronological order, making the audience question which way is up. I never had a problem with this because memories are often times like that. Do we really remember things in chronological order?

The plot of this film revolves around Clementine erasing Joel from her memory and how he decides in retaliation to Clementine’s erasure session to have his memories of her erased as well. What we see is Joel within his own memories, at times watching like a spectator and at other times fully immersed in the memories themselves. What’s interesting about this film is that while this is going on, Joel wakes up inside his memories, almost like a lucid dream experience. Through the course of the film Joel decides he would rather remember all the times they had together, for better or worse. Is it better to have loved and lost than to never have loved at all?

This is a great film because the dialogue is witty and intriguing, the visuals are surreal, the film has a clever story that stretches narrative boundaries and the characters are ones we care about no matter their blunders. Within this film the characters are able to think outside the box and the film makers respect the audience enough to allow them to come along on the ride.

Posted by Shawn Daniell at 3:33 PM