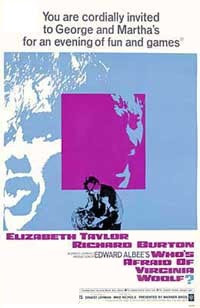 "Who's Afraid Of Virginia Woolf", A Battle of Words

“Who’s Afraid Of Virginia Woolf”, a play by Edward Albee, was brought to dazzling life in the 1966 film starring Elizabeth Taylor and Richard Burton. The film was directed superbly by Mike Nichols. Whenever I approach this film, I go in realizing that I will be emotionally exhausted after watching it, but the experience is phenomenal.

George, played by Burton, is an aging associate history professor. He is meek mannered, quick witted, and full of a bitterness and despair that lingers in every scene. Martha, played by Taylor, is the university president’s daughter and George’s wife. She is a hard-drinking, shrewish harpy of a woman that revels in throwing acid-sharpened insults at her husband. Martha can’t stand the fact that George hasn’t made more of his life. Being the daughter of the university’s president she expected more out of George. After all he is a mere associate professor after working for the university for so many year. Why isn’t he running the history department?

The story opens with sleepy, tranquil music playing while George and Martha walk across the campus after a late night party thrown by the university’s president. The music’s charm is broken by a wicked, liquor-laced laugh by Martha and a “hush” from George. It is revealed that Martha has invited the new professor and his wife over for drinks. The guests have no idea what’s in store for them. It will be an evening of word wars, violence, disillusionment, betrayal, and secrets revealed.

Through the course of the evening the four characters play many verbal games with each other, which include: "Humiliate the Host", "Get the Guests", "Hump the Hostess", and "Bringing Up Baby".

George and Martha are a couple that have been married for a long time. They are used to the flawed skins of each other. George knows that Martha will get fabulously drunk, make a pass at the male guest, and spew bile for the entirety of the evening. Martha knows George will take it. Whenever Martha gets the chance she emasculates George and he puts up with it every step of the way.

The guests played by George Segal and Sandy Dennis are wonderful in the roles of the guests. Segal plays Nick who doesn’t want to get involved in other people’s affair. He doesn’t have much of a choice in the matter. George and Martha make him a victim and an accomplish in the night’s “festivities”. Dennis is Nick’s “mousy wife”, Honey, who’s marriage to Nick was procured on questionable grounds. During a phase in the film called “Get the Guests” George makes a point to bring the guests into the verbal onslaught, making them victims of their own life story.

What makes this movie work so well is the chemistry between Taylor and Burton. Underneath all of the hateful words there is a strange, twisted love that crawls through. This is ultimately a story about love, disillusionment, and the hell that we put ourselves through in the name of love.

In the end the audience is a victim as well. We stay glued to our seats, watching the game being played on screen. No matter how painful the experience is we can’t look away. This is a thinking film, so if you want a sweet easy film, don’t bother. You won’t find it here.