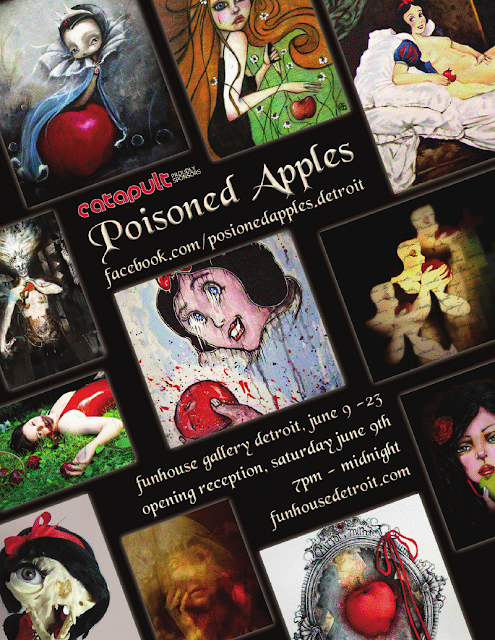 This year is the 75th anniversary of Disney's Snow White. The Funhouse Gallery in Detroit, Michigan is celebrating the anniversary with an evening of art and live performances. With more than 80 local, national and international artists and live performances by Lula La Rose, Izgreyala, Meridith Lorde, Lushes LaMoan, Emily Infinity and more, Poisoned Apples is sure to be a fantastic exhibit.

Diane Irby, a multimedia artist and urban explorer from Detroit, Michigan, spoke with ArtSeen about the inspirations behind Poisoned Apples.

Can you tell us a little about the Poisoned Apple art show? What was the Inspiration behind the art show?

My life-long love of Snow White and a trip to Disney World last fall was the inspiration for Poisoned Apples. When I came back from vacation, I started creating works inspired by Snow White, and then a couple friends created some Snow White pieces. Once I realized that 2012 would be the anniversary of the Disney film, it all just came together in my head.  With two Snow White-inspired films coming out this year, resurrecting and creating a buzz about the story, it just seemed like a good time to get a bunch of talent together and celebrate it.

What were the guidelines in order to be considered for inclusion in the Poisoned Apple art show?

When I put out the call I asked artists to give me their interpretation of the story or an aspect of the story that stood out to them. I knew I'd be seeing some Snow White portraiture, but I also wanted the artists to be inspired by the entire story and themes presented therein, and then maybe even give it a twist. I threw out keywords such as fetish, drug induced, range of human emotions, as well as what you'd classically think of, like the anatomical heart, the apple, poison, etc. I was excited to see what people would do, and the response was overwhelming. The live entertainment at the opening reception will be acts inspired by the story as well.

The Poisoned Apples exhibit is June 9-June 23, with the opening reception June 9 from 7p.m.to midnight at the Funhouse Gallery in Detroit, Michigan. Gallery Hours are Thursday- Friday 5-9 p.m., Saturday 2-6 p.m. and by appointment. For more information about the Poisoned Apple exhibit, you can visit their Facebook page for more details.

Thanks for stopping by guys! This looks like such an awesome show, wish I lived closer.