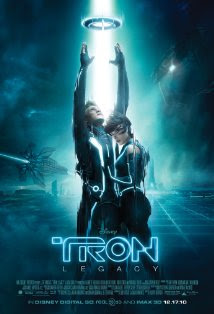 Did I Want to Leave Because of Uncomfortable Seats or the Movie?

The original "Tron", created in 1982, had an original idea behind it; the real world meets the virtual world, but Tron's newest brother "Tron Legacy" lacks creativity and a couple of key ingredients.

In the second installment, Kevin Flynn has been missing for 20 years. His son, Sam, a 27 year old program enters the Grid to find his father.

So the Tron Legacy looked nice but not overwhelmingly fabulous. Watching this film in 3D was a waste of time. It seemed that the only reason they used the 3D feature was to make more money on ticket sales.

Besides the fact that the visuals lacked punch the pacing was a major issue with the film. I have spoken with several people that liked the first movie and pacing seems to have been an issue in the 1982 movie as well. "Tron Legacy" would have been saved by seat sitters' remorse if it had shaved about 20-25 minutes of contemplation off the movie. There were moments during the film when I wondered , "Why are we sitting here? Doesn't the portal close soon?" I really think this is where the film went wrong, it couldn't decided whether it wanted to be a flashy special effects movie or if it wanted to answer deeper meanings of life. The film did neither very well.

I felt that the first movie did a better job of exploring concepts of man versus machine and the dangers involved in that equation. The second film regurgitated the same concepts and try to make it more powerful by including a clone of the creator(both played very well by Jeff Bridges).

And where was Tron in all of this? Tron was an afterthought. I wanted more Tron, after all the film is called "Tron Legacy".

The best part of this film was the music created by Daft Punk. The music has a lot of energy that I wished had rubbed off on to the film.

"Tron Legacy" is ultimately a movie that couldn't make up it's mind, "Am I a special effects movie? Or am I a philosophical foray on the concept of man v.s. machine and man v.s. himself? " I am still clueless.....