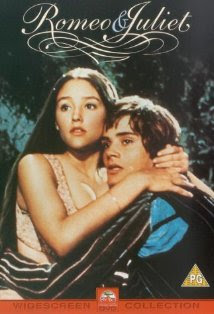 "O Romeo, Romeo! wherefore art thou Romeo?
Deny thy father and refuse thy name.
Or if thou wilt not, be but sworn my love
And I'll no longer be a Capulet."
- William Shakespeare, Romeo and Juliet, 2.2

For me Shakespeare is a visual experience and with Franco Zeffirelli's production of "Romeo and Juliet" you have a fine example of Shakespeare at his best. I remember the first time I saw this movie, it was love at first sight. For me this film version was my Romeo, a love that I bear to thee.

We all know the story, Juliet and Romeo are from two feuding families. They fall madly in love with each other in spite of the problems between the families. The feud between the two families is sad, full of ignorant impulsiveness, and ultimately deadly. If you think about it, this play is a commentary about the folly of humans both in love and war. Without folly there is no tragedy. If the families would have shown maturity in certain matters (they are likened to selfish squabbling children), then they might have been able to make peace with each other before having two loose a child from each family. If Romeo and Juliet hadn't been so impulsive in their love then they might have avoided their fatal end. And then again it is human to be imperfect, aren't we all children in the grand scheme of things. It is the tragedy that makes this story all the more powerful.

Zeffirelli knows his stuff. By casting unknowns in the roles of Romeo and Juliet he made a wise decision. Leonard Whiting and Olivia Hussey are magical in the roles of the star crossed lovers. They bring a freshness and innocence to the roles that might not have been present if the director had chosen more seasoned actors to play the roles. The stars are both young( Whiting seventeen and Hussey fifteen) like the characters that they play. It is this youthfulness that works so well, it makes the acting all the more believable as if the two actors have become Romeo and Juliet for two hours.


I have seen so many bad productions of Shakespeare (don't even get me started on the 1996 film directed by Baz Luhrmann) that it is refreshing to see a production that remains relevant to this day. The sets, locations, and costumes are sumptuous and gorgeous; dripping with a leisurely summer's freshness. When viewing the film it almost as if the audience has stepped out of the theater into the Italian countryside.

The music for this film was composed by Nino Rota, a Italian composer that composed music for many great films such as the first and second Godfather films. The music was perfect: soft, silky, sad and romantic. The theme for Romeo and Juliet is so full of melancholy and beauty that it makes my heart pause for a moment (what can I say I am a hopeless romantic).

For anyone who is a lover of Shakespeare I whole heartily recommend this film to you. You won't be able to help falling in love with "Romeo and Juliet" all over again.