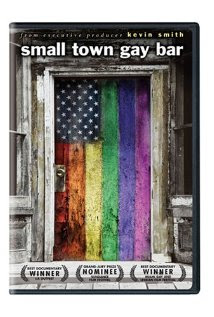 “Small Town Gay Bar” is a 2006 documentary film that focuses on the relationship between friendships/family environment at the local gay bar and the antagonism of the Bible belt experience in small towns in Mississippi. This movie had been sitting in my Netflix queue for some time. I was waiting for an ideal time to watch it, where I could take it all in.

Malcolm Ingram directed this film based on the experiences of homosexual locals from two towns in Mississippi. What struck me the most about this film is the general underlying sadness. For many these bars, Rumors and Crossroads, are the only places the subjects of the film can be themselves. They are members of a fairly religious society that considers them to be second class citizens.

The focus of this film is not the camera work or the lovely locations, most of the scenes take place in very poor areas of Shannon and Meridian Mississippi. The focus is instead on the stories of the people who frequent the two bars. Through these bars the subjects are able to form a close-knit group. It is within these groups that people can come as they are and exist without fear of being accepted.

I thought this film was successful. It gives an honest perspective from both sides of the story, ranging from supportive to downright angry and hateful reactions. One particularly hateful person that was interviewed was Fred Phelps, the leader of the Westboro Baptist Church out of Topeka, Kansas. Phelps is known for creating the slogan “God Hates Fags” and spreading hate. I think it is this balance between showing the good and the bad that makes this film successful.

So when you’re out on the town, don’t forget your local gay bar. The only thing this film asks is that you be yourself. Straight, gay, girl, boy, black, and white, it makes no difference all are welcome.

Posted by Shawn Daniell at 7:50 PM